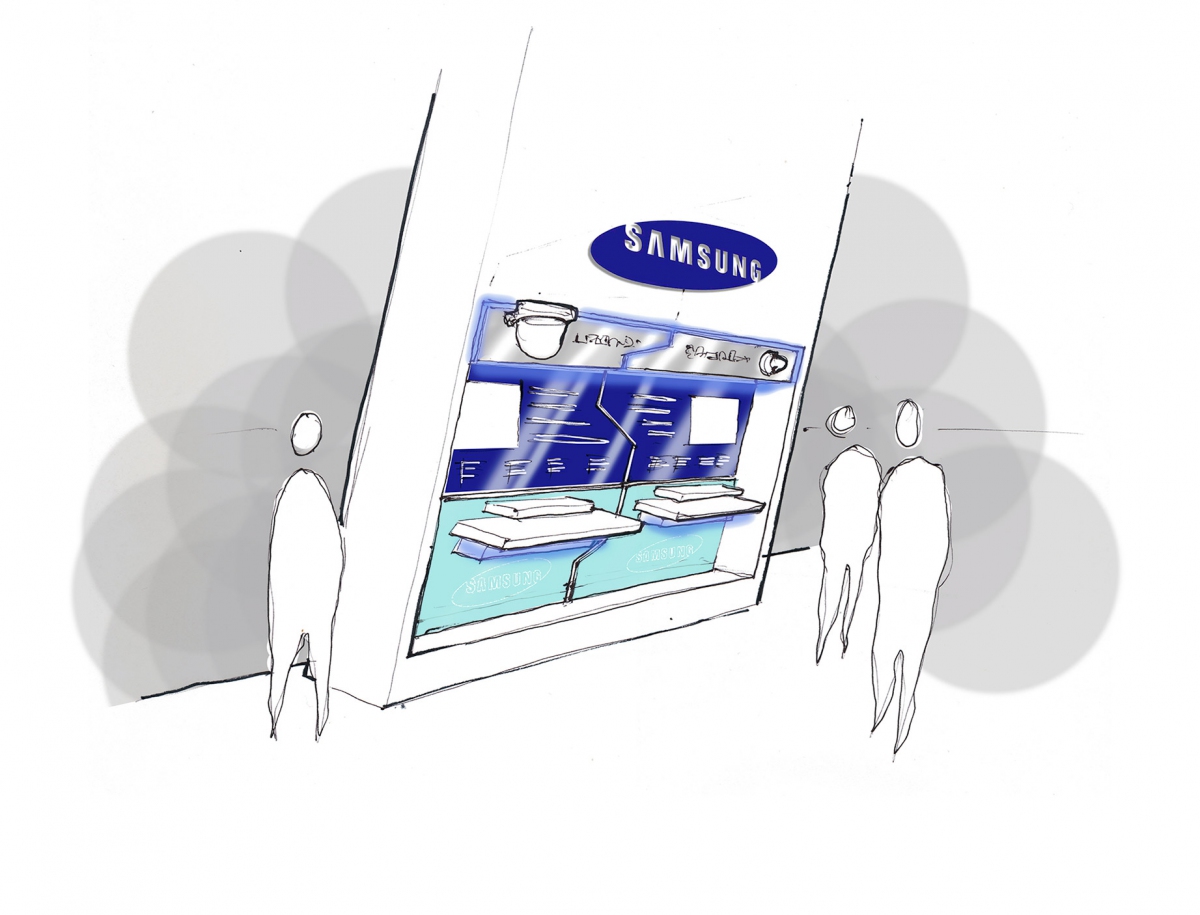 Samsung are a market leader in security imaging, their exhibition stand design brief was to create a double-deck stand that would showcase their latest technology which included a robot showing how artificial intelligence could be used in the future. The stand needed to accommodate a vast amount of technology & in addition to this many functional architectural elements too, such as meeting rooms & spaces , hospitality, storage and interactive zones. With so much innovative equipment to display clearly defining zones & educating visitors was going to be one of the key  focus points for our concept. 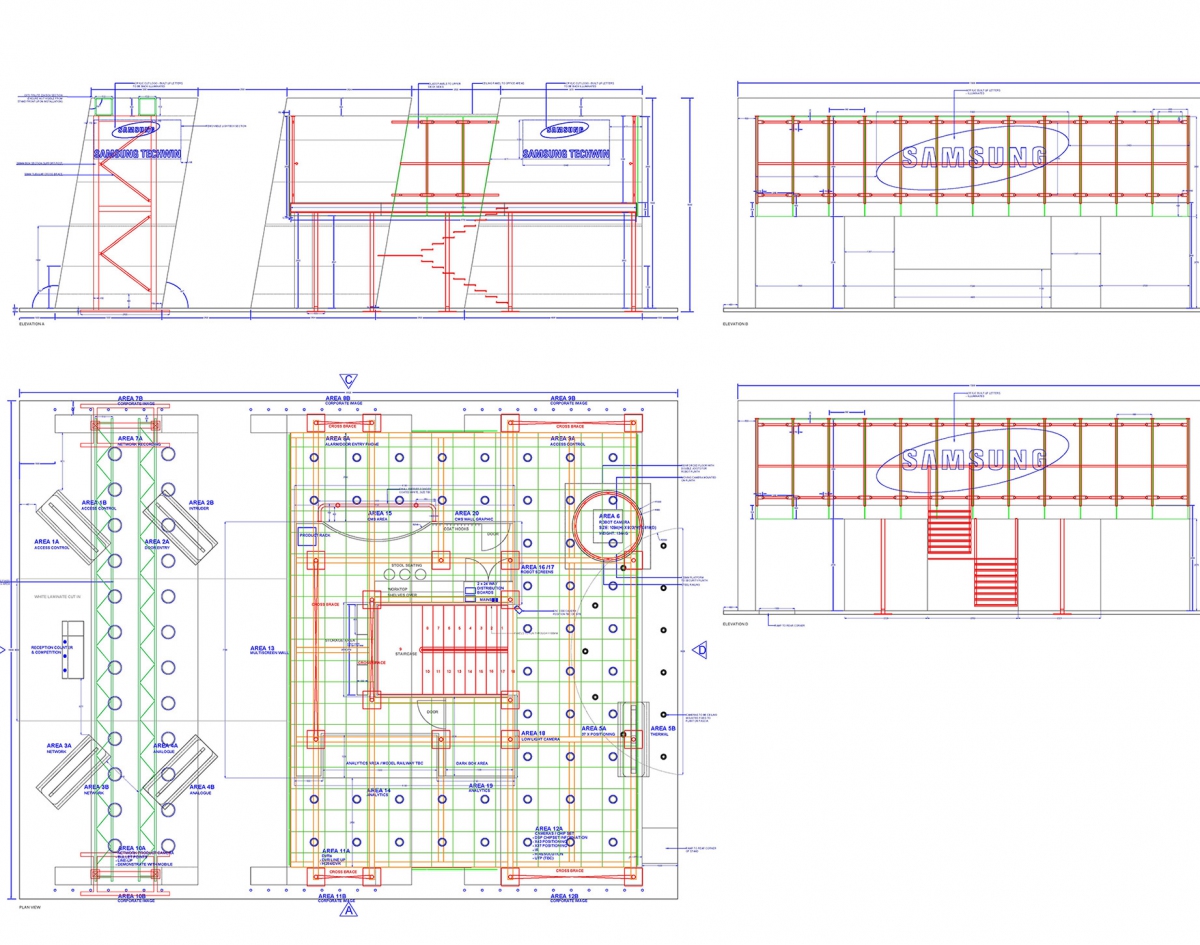 With a 390sqm footprint of space the stand was a true smorgasbord of digital engagement for the delegate. The real struggle in the design was going to be in successfully fitting the vast array of technology that Samsung boasted into the space itself. Touchscreens, camera displays, & even a model railway set were to be incorporated & designed into the layout. The upper deck area was to be used as an exclusive invitation only zone. Here guests could initially go to the hospitality lounge where an abundance of catering was on offer & sit behind the large expanse of glass that looked out onto the stand below, before going to one of the numerous priority meeting rooms. With such a big client name to uphold it was essential that we delivered the highest quality of build both on time & on budget. 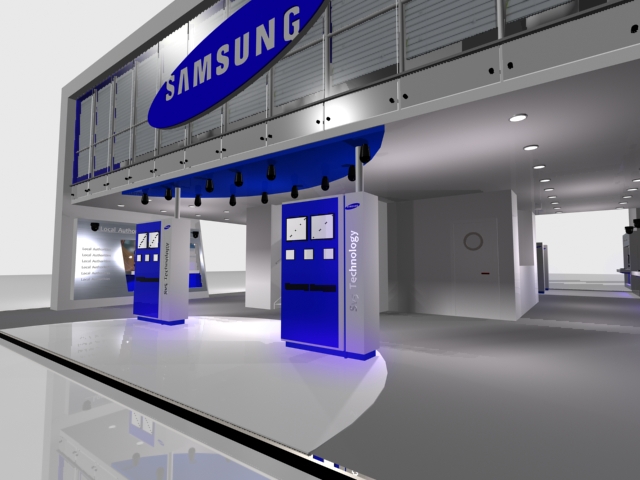 Three six-metre-high arches spanned over the steel and glass structure, with a giant 3d illuminated logo sat at maximum height commanding the stand frontage.  Each arch was used to show a different security scenario at the event, for instance one showed a CCTV installation in a shopping mall and another a school. A five-metre-wide video wall stood proud in the middle of the stand relaying imagery from SGR-A1 – a military robot with tracking and gesture recognition located on the opposite side of the space.

Beneath the arches, display pods featured a control center, which operated cameras that were placed around the stand. The center of the exhibition stand incorporated a model railway complete with hills and tunnels which illustrated how the number plate recognition worked on their security cameras, a real hit with the visitors. A double stairwell lead to the first storey deck where further hospitality & meeting rooms were positioned for further business engagement. The arches were also a perfect opportunity to display large impactful graphic treatments, externally decorated in professional lifestyle imagery & to the internal IT based info graphics were combined to support product.

The Samsung brand & reputation was really affirmed by the shear physical, architectural presence of what was constructed here & this combined with the enhanced treatment of illuminated logos & branding really made the structure stand out from the crowd. With fresh innovative technology in abundance footfall was really driven to the stand & the space became alive with the hustle & bustle of its vast number of visitors & staff. The controlled upper deck area really accomplished its goal providing a VIP lounge & business meeting areas. The partnership formed between Envisage & Samsung was a great success & allowed us to move forward after the event, collaborating on further exhibitions & projects .

Creative Director for the exhibition stand designers at Envisage, stated “with so much going on, the trick was to distill the elements to what was important, so that the visitor could easily find the information that they wanted”.”

See more images from the show: